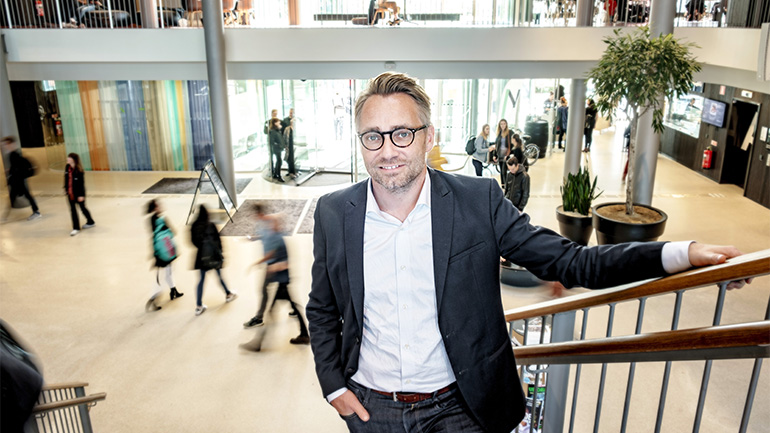 Andreas Jacobsson, dean of Faculty of Technology and Society is delighted with the boost to doctoral education.

A private anonymous donation of ten million Swedish kronor has been given to Malmö University from a benefactor who wants to invest in higher education in his home city.

Through a fundraising campaign, the Faculty of Technology and Society will receive the money to support research in its field.

Without compromising the integrity of the research, we have presented a number of different proposals for which we want to spend the money.

Andreas Jacobsson, dean of the faculty, fundraising director Maria Vidakovic, and the donor, came to the conclusion that material science was the area to invest in.

Martin Fisk and Pär Olsson, both researchers and university lecturers at the Department of Materials Science and Applied Mathematics, were asked to present the material research to the donor.

“This was our opportunity to explain why our business is important. We are used to presenting in other contexts, but this was a little different,” says Olsson.

“Without compromising the integrity of the research, we have presented a number of different proposals for which we want to spend the money. This has led us to agree that the donation is of the greatest benefit and gives the greatest effect in the build-up of postgraduate education,” says Jacobsson.

Fisk and Olsson will be responsible for the doctoral students, the equipment and the supervision. Since the donation is distributed with a million SEK per year over ten years, the money will be enough for two doctoral students of five years each. The project will be about studying and developing materials for better performance and longevity, which promotes both economic and environmental sustainability.

“The hardest part of presenting what we do was translating the language into a popular scientific language. We are used to writing applications to other researchers to review and evaluate the project. It was difficult to simplify, but also a good exercise,” says Fisk.

Jacobsson, who was initially sceptical about fundraising, said: “The fundraising team has acted exemplarily around the collaboration — compliant, responsive, guiding and prompt. The relationships we build with important players in society contribute to strengthening the image of Malmö University as a player in research and education.”