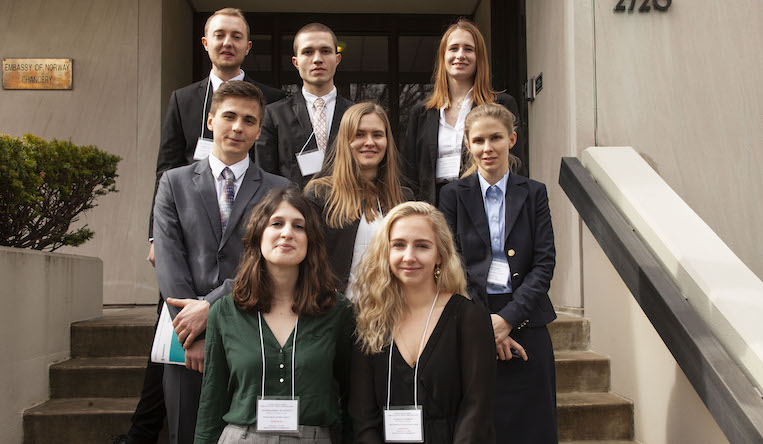 Students from the International Relations bachelor’s programme excelled during the four-day conference simulating a NATO summit.

Aleksandra Daynova and Tomas Rylenius were two of the students who participated. Daynova is Bulgarian-British and in her final year of bachelor’s studies, while Rylenius is from Sweden and a first-year student. The delegation was briefed beforehand by the military attaché and the head of political affairs at Norway’s Washington Embassy.

“I have taken part in some simulations before, but this was on a whole other level,” said Rylenius.

“The feel of the summit is very realistic. At the embassy we were given in-depth information on Norway’s current strategy. It was interesting to learn what a strong position the country actually has within NATO due to factors such as climate change and their geographical proximity to Russia.”

As one of only three participating European universities, the delegation did extremely well at the conference, even taking home a Leadership Award.

Reading about something is completely different from being on the inside and seeing what diplomacy actually looks like.

“The conference is very ambitious and many of the participants are very experienced, so receiving an award was great. I was actually most nervous about the etiquette as there is a specific and structured order of speaking and important phrases you have to memorise, but you just follow the others’ lead and it’s actually really fun,” Daynova said.

The students’ faculty advisor, Scott McIver, stated that “the delegation did exceptionally well, given that it is only the second year that Malmö University has participated.”

Both Daynova and Rylenius agreed it was a valuable experience and something they hope will become a permanent feature of their study programme.

“It’s without a doubt beneficial to our studies because we get to see international relations in action,” said Rylenius.

“I hope to go again next year and have already recommended it to my other classmates — it’s also a rare opportunity among European universities offering international relations programmes.”

“Our programme is heavily academic, so it’s super helpful to see the practical side of the theory we’re studying. Reading about something is completely different from being on the inside and seeing what diplomacy actually looks like,” added Daynova.