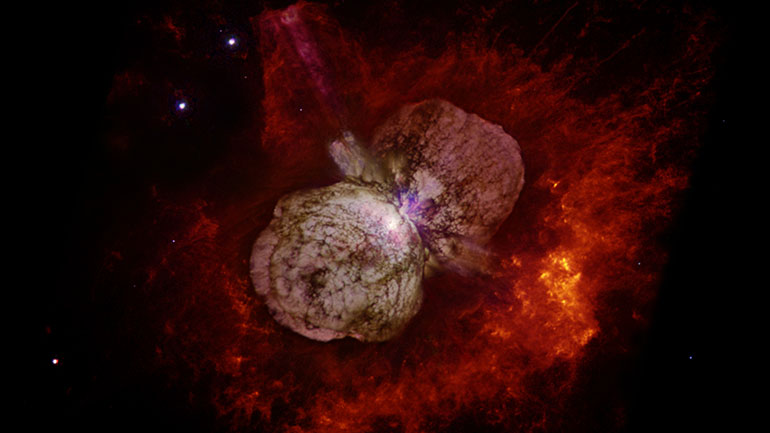 Photo by Nathan Smith and Jon Morse, and NASA.

After a visit to Malmö University, a NASA emeritus astrophysicist is set to launch a collaborative project with an academic from the Department of Materials Science and Applied Mathematics.

Gull’s career has spanned more than 40 years and during that time he has completed numerous research collaborations with Hartman and other colleagues at Malmö University.

“The plan is to explore a strange phenomenon that I’ve observed in a massive star system called Eta Carinae and which I hope Henrik can help me explain,” Gull said.

The planned research campaign is a symbiotic collaboration between astrophysics and atomic spectroscopy. Astronomic spectroscopy is a method for studying the composition of stars by looking at the full spectrum of light they emit. Spectrograph instruments mounted on telescopes allow astronomers to examine the material compositions of objects at very great distances.

With the rapid changes in density, temperature and radiation, Eta Carinae is quite literally a unique atomic physics laboratory.

The project, which involves an international network of around 50 astrophysicists, will see researchers use spectroscopy to study Eta Carinae, a widely studied system of two massive stars orbiting each other located within the Milky Way Galaxy but at a distance of 7,300 light-years from Earth. It is rapidly changing, preparing for its final supernova-like outburst.

Every five and a half years, the two massive stars get close to each other — almost as close as the distance between the Earth and the Sun. During this near collision event, which is set to occur again in February 2020, the stellar winds of each massive star collide, unleashing extremely powerful energy bursts that give astronomers a rare chance to study a range of astronomical phenomena.

Researchers are now formulating observation proposals for a research programme in which they will observe Eta Carinae from a range of different telescopes around the world during a period of about eight months.

“The multi-wavelength observations are key to understanding this object. And with the rapid changes in density, temperature and radiation, Eta Carinae is quite literally a unique atomic physics laboratory,” Hartman explained. “It allows us to study physical processes that are not possible in experiments on Earth.”

The massive star system has long fascinated astrophysicists and is usually one of the first objects that astronomers turn to when new telescopes are launched.