Pandemic schmandemic — investigating how we’ve been linguistically lifting the mood 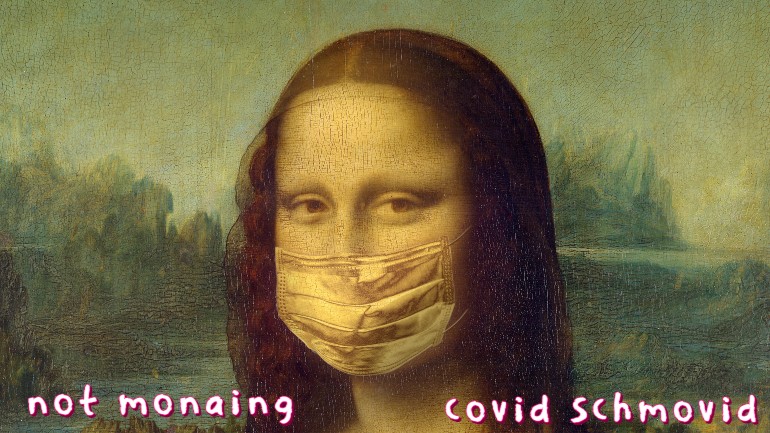 ‘Covid schmovid! What’s the worst that could happen, right?’. When we are living through dark times, we use humour to lighten the mood, and a particular linguistic quirk has been explored in an article co-authored by a Malmö University senior lecturer.

The use of ‘schm’ is a form of reduplication in which the first word is repeated with the following word starting with ‘schm’ or ‘shm’. Originally part of the Yiddish language it has bled into widespread use in English, particularly in America, where it is generally used to indicate irony, sarcasm, derision, or scepticism.

The paper, ‘“#COVIDSchmovid! #SummerTreats” The usage and functions of schm-reduplications in corona virus related discourse', is co-authored by Maria Wiktorsson and Satu Manninen, a professor in English linguistics at Lund University.

The aim was to investigate the use of schm-reduplication in corona virus related discourse found via a Google search. In the paper it is reported that schm-reduplications, such as ‘covid schmovid’, ‘corona schmorona’ and ‘pandemic schmandemic’, are frequently used to lift spirits — to show that, despite all the odds the pandemic has thrown at us, we are still able to both cope and continue our lives, and also maintain our sense of humour.

The ‘schm’ construct is part of a group of words known as ideophones, which, in English, includes such constructs as hippity hoppity, hodge podge, and hoity toity. Such constructs are used throughout the world and occur across a spectrum of languages. However, Wiktorsson notes they had not been a focus of study in English and European languages.

“In a lot of European languages they have been brushed under the carpet as something we don’t need to take seriously; considered just children’s language, which we use in poetry and songs, but we also find them in ordinary, everyday language.

“Some researchers claim that they are not part of language, that they are out of ‘language proper’ — not even proper words or categories of language,” said Wiktorsson, a senior lecturer with the School of Arts and Communication.

For the purposes of the paper, six different pandemic related terms were searched. This part of the research took place in the spring and summer during a period we now know was the first wave of the pandemic. It covered discourses found across social media, the blogosphere, and even light-hearted news commentary.

“When we hear about all these death rates going up and businesses going bankrupt, people are saying ‘corona schmorona’, I can get through this.

“Humour is a survival mechanism, it is something we resort to in hard times. It is one way of getting out of a horrible headspace. It is part of human nature that people will try to reduce horrible things into something that is more manageable or something that we can laugh at,” said Wiktorsson.

They found the downplaying function can also be directed at, for example, how serious the situation is, if it is really as deadly or as contagious as the government are saying. But that was not the majority of the cases, the research showed.

They have noticed a decrease in the schm-reduplication for continuing research which focusses on the ideophone’s prevalence with hashtags across Twitter and Instagram.

“We’ve found examples of the hashtag in the context of it being a government hoax, posts suggesting ‘it’s all lies’, and used by people who are actually rebelling against the lockdown rules and quarantines,” said Manninen.

She added: “Perhaps what we are seeing is lockdown fatigue — it might be that people are not as optimistic.”

Find out more about the research and download the full paper