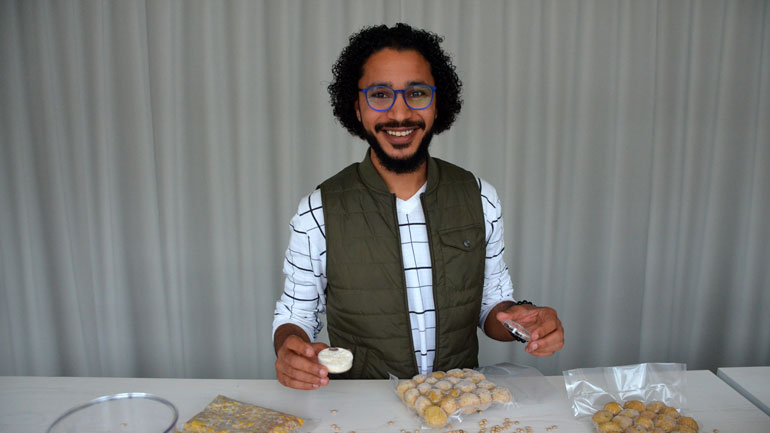 The University supported Salah in the development of his lupin bean start-up. In October, he will be competing for the title of the World's Best University Start-up in Copenhagen.

“The lupin bean is similar to the soy bean because it contains the same amount of protein. To me, the most important thing to know about the lupin bean is that it’s locally cultivated in Kvidinge,” says Salah. His company, Lupinta, is based in Malmö.

Lupinta wants to change how we consume protein by developing a line of products based on plant protein, such as milk, flour, cheese and falafels. The advantage of using edible lupin is that it can be grown in Sweden. Edible lupin should not be confused with the variety that grows in the wild.

"A large part of today's soy production is taking place in countries outside the EU. This means extensive transportation, and production that is often unsustainable,” says Salah.

Lupin beans are commonly eaten as snacks in Egypt, where Salah grew up, whereas the idea of incorporating them into different foods is fairly recent in Sweden. Having a strong interest in nutrition and having studied agronomy for several years, it didn’t take Salah long to develop his idea.

While taking language courses in Swedish and English at Malmö University he contacted Drivhuset, the University’s centre for student innovation.

"When I participated in their pre-incubator, I learned more about how to pitch ideas, set up a budget and work with digital marketing,” says Salah.

This summer, he had the opportunity to work on his project full time after receiving financial support from the University. The grant, which amounts to 30,000 SEK and is dispersed among six student projects, is part of Leapfrogs, a collaboration between several Swedish universities.

With this help, Salah was able to introduce the so-called ‘lupioka-falafel’ to visitors at Malmö’s falafel festival in June. He is now trying to get restaurants in the city to start using lupin-based tempeh.

Honorary doctorate at Malmö University’s Faculty of Technology and Society, Hampus Jakobsson, is a prominent figure in Malmö’s start-up scene. He believes Salah has the unique determination required to succeed as an entrepreneur — a trait that is commonly referred to as ‘grit’.

Eating meat is among the worst things you can do for the planet. What I like about Lupinta is that it offers natural products that are good for the environment and good for humans. What I like about Eslam is that he’s fighting forward with his idea. Right now, he’s encouraging kitchens to start using the product and that's the way I think it should be done.

As an innovator, it’s usually all about expanding, going big, or joining an established company. Salah has already decided which path he wants to take.

"In five years time, I want Lupinta to be the natural choice for lupin-based products, not only in the Nordic countries and Europe, but also in other countries where it’s possible to cultivate the bean, like the United States and Egypt. The ability to contribute to positive change is what motivates me. I want to be an agent for change.”

Drivhuset is Malmö University's centre for student innovation and offers students tools like one-to-one coaching, workshops, and the chance to share ideas with like-minded people.