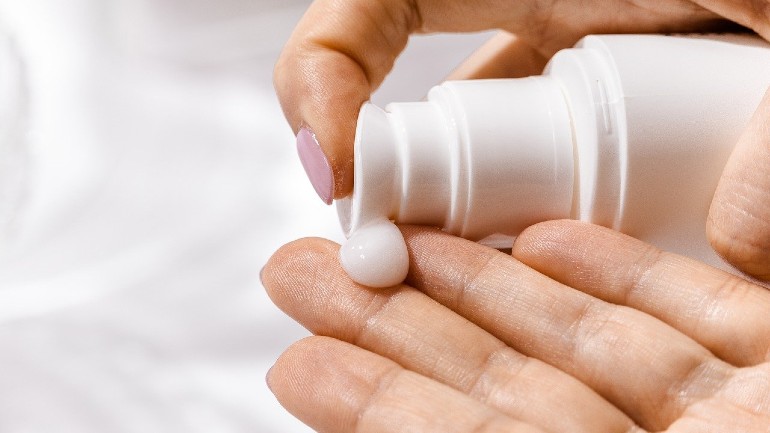 Taking a “dive into water” and topical formulations has led a Malmö University researcher to further understand how drug manufacturers can use a sustainable ingredient for medical and cosmetic purposes.

Abdullah Ali, who recently defended his thesis, ‘Topical formulations, design and drug delivery: A dive into water’, which explores the effects of water on drug delivery. It also focusses on using an alternative ingredient for topical creams, which can treat such ailments as eczema and dry skin.

We could also see how it could create novel types of formulations, such as a two-in-one hand sanitiser which could be both anti-microbial and a moisturiser.

“I’ve been interested in how different topical drug formulations vary in both medicines and cosmetics, how they are put together, what ingredients can affect them, and how the ingredients affect the properties. So, one thing was to understand how water in the formulation, and at the topical membranes affects, for example, drug delivery,” says Ali.

The research project was mostly focussed on making topical creams using a sustainable source, such as quinoa starch particles. By using starch particles, Ali could replace traditional surfactants (small molecules which can stabilise mixtures of water and oil) that are normally used to make an emulsion.

“We can replace these surfactants with a sustainable and natural source. They can also be an alternative for people who have allergic reactions. We are going towards a more sustainable approach everywhere, and by using such a source it was very interesting to understand how we can create new types of emulsions and work out how we can use it in other ways,” says Ali.

Ali and his fellow researchers looked at ways the alternative ingredient could be used to produce a different cosmetic feel after being applied. It was found that it gave a drier feel which, in a survey of 30 people, most people preferred — traditional creams were found to be oily and sticky.

“When using these creams, there is a cosmetic appeal which is very important; there are properties such as the viscosity of the cream, how sticky or oily it is, these properties might make patients not use them if they don’t like how it feels.

“We could also see how it could create novel types of formulations, such as a two-in-one hand sanitiser which could be both anti-microbial and a moisturiser. This is where you have an agent, such as alcohol, and still have an emollient which can contribute to moisturising the skin — by using the starch, we can do it with a skin-friendly natural source,” says Ali.

Four different creams with different compositions of ingredients were used as part of the survey, one of which utilised the starch-based surfactant. The aim was to understand and map out what attributes can relate to a certain composition.

“Some ingredients had more of an affect on the cosmetic appeal and others could have more of a physical effect, on viscosity, for example,” Ali adds.