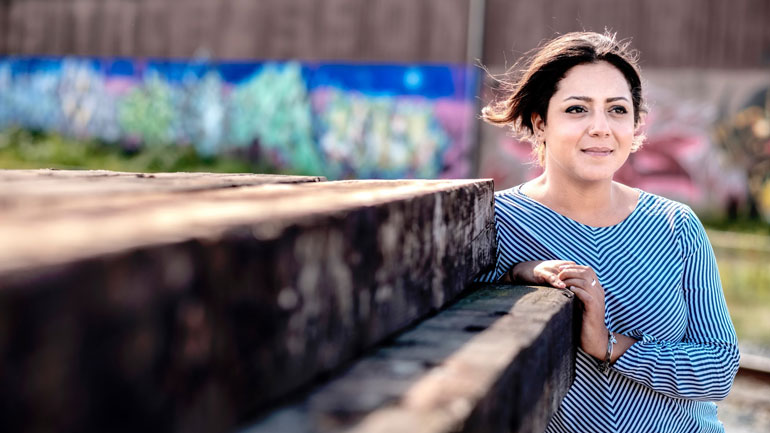 After a family history of forced migration, Haneen Abdel Khaleq is now dedicated to supporting others in similar situations.

Haneen and her family were living in Kuwait when the Gulf War erupted in 1990, forcing them to flee along with an exodus of other Palestinians. By the time she was ten, she had already moved from Syria to Jordan to Qatar, before finally settling in Australia.

As an adult, Haneen began working with Palestinian refugees in Jordan and knew straight away she’d found her calling. Then, at the height of the ‘refugee crisis’ in Europe, she was offered a scholarship to study International Migration and Ethnic Relations at Malmö University.

“At that point there were lots of people arriving in Sweden from places like Syria, and a lot of conversations going on around refugees and asylum seekers,” she says.

“Being in Malmö, I could see the effects of war on displacement and the movement of people firsthand, and could then go to class where we learned about it and discussed it in an academic way.”

She adds that learning alongside other international students from countries in Africa, Asia, and the Middle East enriched her experience as a master’s student in Malmö.

“We could share our different experiences and opinions on the kind of things that were going on. That diversity was really valuable.”

Haneen is currently finishing her thesis while working as a Protection Officer in Lebanon, where she describes the situation for Syrian refugees as bleak.

“There are so many issues that refugees face in Lebanon; a lot to do with practical things, like their legal papers. It’s devastating to see the situation going from bad to worse, and people even considering going back to Syria,” she says.

Dealing with such heavy issues on a day-to-day basis takes its toll emotionally but, as Haneen points out, learning to cope is a process.

“When I started working with refugees five years ago it was often really difficult. People would tell me that living in limbo was making them feel suicidal. For me, receiving a lot of support from the places I’ve worked has helped, and over time it’s become easier and I’ve learned to deal with it.”

Her goal for the future is to bring about changes to migration policies, but for now Haneen says she is most comfortable on the ground, interacting with people.

“It might be a bit cliché, but the most important thing to me is to make some sort of difference, even if it’s in a small way. These people are going through what may be the worst period of their lives, and I want to support them in all the ways I can.”

Haneen’s interest in migration has understandably stemmed, in part, from her personal experience as a Palestinian Australian.

Reflecting on her outlook, she says learning about things like the economy, migration flows, and integration while at Malmö University has allowed her to think more practically about ongoing injustices and how she can make a change.

“I think I see things more pragmatically these days. Having seen firsthand how terribly asylum seekers are treated in Australia, I know that improving the situation and upholding refugee rights is something I’ll always advocate.”

Studying at the University was an important part of Haneen’s journey towards where she is now, and has also helped her come to terms with certain parts of her own life and identity.

“My studies helped me to understand that my identity doesn’t have to be so rigid,” she explains.

“Who I am doesn’t have to be based on being either Australian or Palestinian. I’ve lived in so many countries up until now and the more I learn and experience, the freer I feel to live and identify the way that I want.”

Malmö University offers more than 20 English-taught programmes in a wide range of subjects at both bachelor's and master's levels.

Apply to Malmö University for 2019