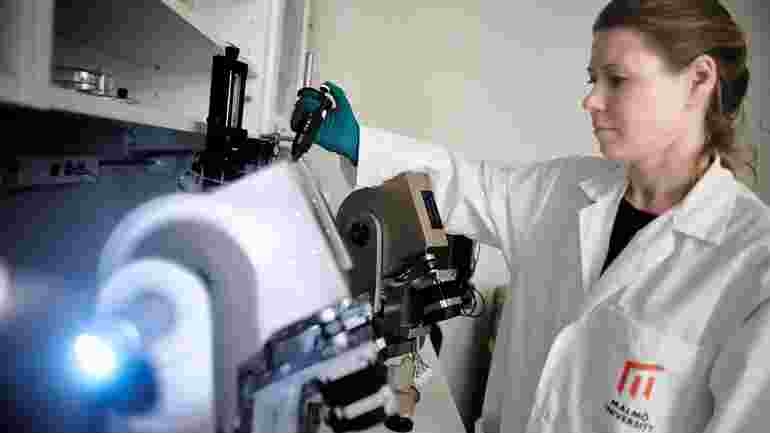 Annual vaccinations against seasonal flu have become a way to protect the elderly and vulnerable in society, but the development of new flu vaccines is both expensive and time-consuming. There is therefore a great need for fast and reliable ways to detect new viruses and virus variants so that vaccines can be produced in time.

Researchers at Malmö University have developed a new technique that makes it possible to detect extremely small amounts of viruses. Molecularly thin films that behave like the membranes of living cells can be used both to detect and stop viruses at an early stage.

We need to find alternative methods that are both fast and reliable. Then we can also stay one step ahead of new pandemics...

“A major limitation with today's tests and vaccines is that they are one step behind. We know that there are flu outbreaks every year, and new pandemics about 15 years apart. To be prepared for this, we need to be able to detect new viruses faster,” says Yulia Sergeeva, researcher at the Department of Biomedical Sciences.

A self-assembled monolayer (SAM) can be described as a thin two-dimensional layer or a molecularly thin film, where all molecules are oriented in a specific direction. In previous projects, researchers at Malmö University have created layers with the specific property that they can quickly attach or detach from a surface when the pH changes. The layers are reversible and are therefore called rSAM, these act as a surface for viruses to attach and detach from – like a magnet.

Sergeeva and her colleagues are now using the technology to develop robust and inexpensive sensors that can detect influenza viruses. On the rSAM layers, they put amidins, a type of chemical compound that, in this case, consists of sialic acid. This is normally found on the surface of the cell, and can attach to the protein hemagglutinin.

“Hemagglutinin is found on the surface of the influenza virus and helps the virus attach to the surface of cells. It interacts with sialic acid on the cell surface. We have used the amidines to try to mimic this process,” explains Sergeeva.

“With rSAM, we can both detect and actually also block the virus. If we attach a nanoparticle to the hemagglutinin, it cannot interact with the sialic acid on the cell surface – all bonds are occupied. This means that we prevent the virus from attaching; in other words, a more advanced way of preventing infection. The virus cannot spread further.”

In a parallel project, the researchers are using rSAM to detect foodborne viruses.
“Unlike other tests, our sensors can detect unknown viruses, not just a specific variant. The advantage of our sensors is also that they can detect very small amounts of viruses, which opens the door for improved and faster diagnostics.”

Both actors from the private and public sector are included as partners in the research project, including the Swedish Food Agency. The authority currently uses PCR tests for viral analysis of water, which is both expensive and time-consuming.

“We need to find alternative methods that are both fast and reliable. Then we can also stay one step ahead of new pandemics and hopefully speed up the development of new vaccines,” says Sergeeva.