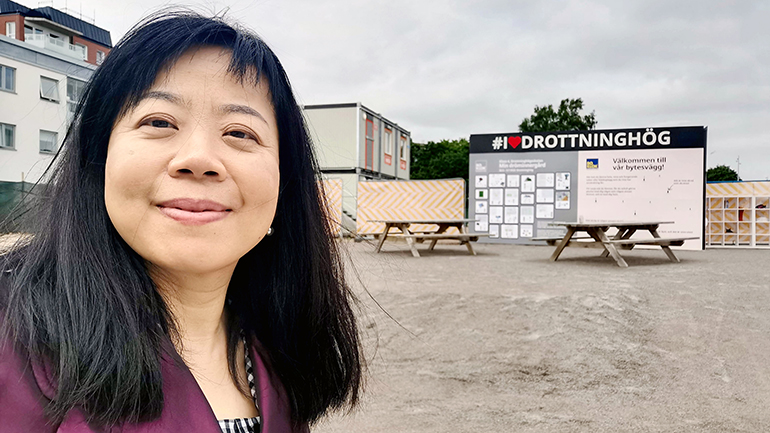 Has the solution to remedy the loneliness of older people and at the same time integrate young refugees been found? In a Swedish city, a mixed housing initiative, based on social interaction between the two demographics, has proved to be quite the success.

The project, called Sällbo, came about at the time a property in the city of Helsingborg, owned and managed by a regional authority, was due to be renovated. At the same time, the Syrian refugee situation arose, and the property was utilised as housing for refugees. It sparked the idea to then mix elderly people with young established Swedes, and new arrivals who were refugee children without attendance of their parents when arrived in the country. In this way, the chance for the new arrivals to integrate into Swedish society and give the older people company would be increased.

They bake and cook together; they help the refugees with their homework.

“What was new about Sällbo, is that Helsingborgshem, the public housing authority responsible for the property, handpicked the residents and made an exception to the rule about housing queues. In Sweden, people applying for public-owned rental housing are put on a waiting list for many years. Helsingborgshem wanted different people in terms of personality, values and backgrounds, including introverts and people who were sceptical about living with refugees,” says Ju Liu, associate professor of innovation studies at Malmö University.

The building has 51 apartments, of which 31 are for people aged 70 and over. Twenty apartments are given to younger people, ten of which are for new arrivals. There are two different types of contract: a regular rental contract and a social contract where residents sign-up to spend at least two hours per week on socialising and to attend the collective house meeting once a month.

Shortly after residents moved in at the end of 2019, the corona pandemic hit, which meant that social gatherings had to be curtailed.

“I thought that the programme would have to be closed, but the residents started to help each other. The younger ones knocked on the doors of the older ones, who wanted to isolate themselves, to make sure they were okay,” says Liu.

Helsingborgshem believed that the younger established Swedes would be the bridge between the demographics. Instead, the elderly have taken that role, according to Liu.

“They bake and cook together; they help the refugees with their homework. A refugee boy from Afghanistan – where many men sew – started a sewing room, and many older people are also interested in it,” says Liu.

The researcher has followed the project for three years and seen first-hand how the neighbours enjoy themselves and socialise. She and her research group have conducted a large number of interviews with, among others, the project manager, the residents, the housing company's CEO, and the representatives of the municipality. The research study focused on how the project was initiated and carried out, how it succeeded, as well as the project’s impacts on the housing company itself and on the wider society.

Among the success factors were the housing company’s culture of innovation, reliable and transparent communication, skilled and appropriate manager, and flexible leadership. Liu identified the mechanism of how these factors helped Sällbo survived and thrived in two societal crises, namely the 2015 refugee situation and the Covid-19 pandemic. She and her team also evaluated Sällbo project’s immediate result, short-and-medium-term change, and long-term impact in terms of UN’s Sustainable Development Goals.

As a researcher in social innovation, Liu is impressed by how the project has gone through, which has received a lot of attention internationally.
“Sällbo is a social innovation with great novelty and significant meaning to sustainability in the world because senior loneliness and immigrant integration are not solely Swedish problems but global challenges,” adds Liu.