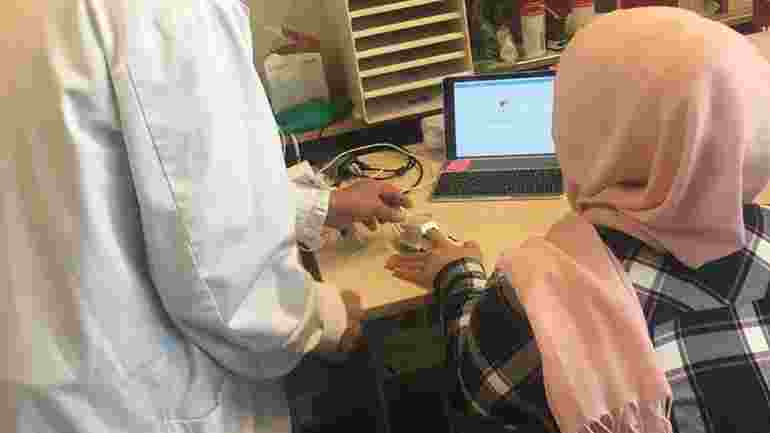 Conventional health checks can be both time-consuming and contain elements that require physical contact between the doctor and patient. Researchers have now evaluated a mobile ‘testbed’ with non-invasive measurement methods.

It is considered “a step in the right direction” to make health checks easier and accessible to more people.

“Non-invasive technology is faster, cheaper and does not require a doctor. There is great potential when it comes to preventive healthcare in the future and to be able to do regular health tests before you get sick,” says Sergey Shleev, a professor of biomedical technology.

Self-care will be more widespread in the future, which increases the need for people to be able to follow and measure their health themselves.

Sometimes non-invasive methods are the only possible alternative in socioeconomically disadvantaged area.

The researchers have developed a movable testbed where they have used a combination of several different non-invasive devices; new technology that can be used as an alternative to conventional measuring tools. The testbed includes equipment that measures blood pressure, heart rate, measures body composition and analyses the blood – without having to take a blood sample.

The equipment is connected to a software called MultiSens, and all results are transferred (either automatically or manually) into a database located on a laptop. The technology also does not require body contact between doctor and patient. Therefore, it can be used in situations where culture, background or religion makes it difficult to carry out conventional health tests.

“Sometimes non-invasive methods are the only possible alternative in socioeconomically disadvantaged area. It can be about being able to take the blood pressure on the wrist instead of the upper arm, or that the doctor does not have to physically touch the patient,” says Shleev.

“The new technology also makes it possible to collect more data, and in the long run, get a more complete analysis compared to conventional methods. With the rapid development of technology, we will also have more precise measuring tools over time,” he adds.

The study is the result of a collaboration between researchers in areas such as biomedicine, care science, and public health. The tests have been carried out in the district of Lindängen in Malmö. Participants in the study also participate in a larger research programme on equal health. Simpler health tests were something that this population demanded, for example, to be able to measure and see the effect of exercise.

It's not just about technology, but about building trust.

“Self-care will be more widespread in the future, which increases the need for people to be able to follow and measure their health themselves. By linking this type of measurement to the other health-promoting activities that exist in the district, health can be strengthened in population groups that are on the verge of falling ill with chronic diseases,” says Margareta Rämgård, who leads the research programme in the district.

In addition to developing the testbed, the study also aimed to investigate participants' health and the relationship between biomedical parameters and perceived health. The measurements showed that the participants' overall health was comparable to the Swedish average, apart from a higher number of people with obesity in the test group. The researchers were also able to observe a connection between biomedical test results and perceived health. The participants in the study welcomed the new measurement methods and were positive about continuing to be tested.

“It's not just about technology, but about building trust. We have taken the time to explain in principle each parameter we have measured and what it means, which has meant that the participants have gained a greater understanding of why the measurements are important,” says Shleev.

Discover more about the study

Read the research article: Developing and evaluating non-invasive healthcare technologies for a group of female participants from a socioeconomically disadvantaged area