Considering a future without bees 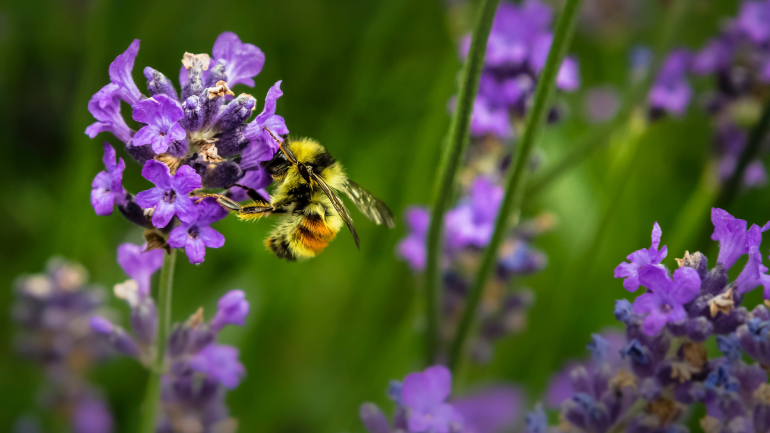 It is widely known that bee populations are decreasing, but what can we do without these natural pollinators? A research group at Malmö University is investigating the future affects and how they can be brought into the everyday narrative.

During the event "Appetisers for Un/Made Futures", Kristina Lindström and Li Jönsson, both design researchers at Malmö University, together with Åsa Ståhl at Linnaeus University, staged possible losses and imagined futures. The event was presented in the scientific article, The thickening of futures.
“’The article is about departing from the idea that the future is far off. Instead, we can think of time as a ‘thick and more extended’ now, and something that includes connections to many different futures and the past,” says Lindström.

During the event, a table of items and food was presented where one side represented the ‘thin’ future and the other side the ‘thick’ present. On the thin side, there was popcorn that comes from corn and is partly self-pollinating; this served as an example of something we will be able to continue eating. On the other side were ingredients and things that were meant to project hope in different directions: ‘thickeners’; among these were drones, as possible pollination tools, and locally grown almonds.

There was a story with each ingredient. The vanilla powder, for example, had a text about the, now, expensive spice, which is in principle always hand-pollinated in the absence of other alternatives. The stories were linked to some type of activity, such as cooking.

“Me holding a sugar beet in my hand, doesn’t mean I understand all its relationships to the future and the past, it requires processing. Therefore, we tried to cook different appetisers based on recipes that contained stories about each ingredient,” says Lindström.

The recipe for an apple punch drink contained apples and fermented honey that retain their beneficial bacteria. The apples have been pollinated by bumblebees that were born in a factory in southern Europe, and which were sent in boxes by post to a logistics centre in southern Sweden and then sent on to Scanian apple orchards. When the grower opens his box, they fly out to do their work. It is unclear what impact the imported bumblebee will have on their new environment.

The researchers believe that the ingredients, recipes, and conversations around the issue, have contributed to a greater understanding of the bumblebees and their lives and needs.

“When we made our recipe for apple punch drink, it turned out that honey's beneficial bacteria are the bees' own medicine. But in commercial honey-making, the honey is replaced by sugar water to survive the winter,” says Jönsson.

After the event, the researchers developed their concept into hand-pollination workshops with growers and designers. In collaboration with the illustrator Saskia Gullstrand, they have produced posters with red clover, strawberries, and almonds to use in discussions about pollination. As part of this initiative, participants created their own hand pollination tools.

“Hand pollination becomes an invitation to imagine the thin future that is not even a thin future but something that happens today in a number of places. It will be a bodily experience that creates space to learn more about pollination, at the same time as it is reminiscent of the unreasonable in a future or time that relies on human pollination,” says Lindström.