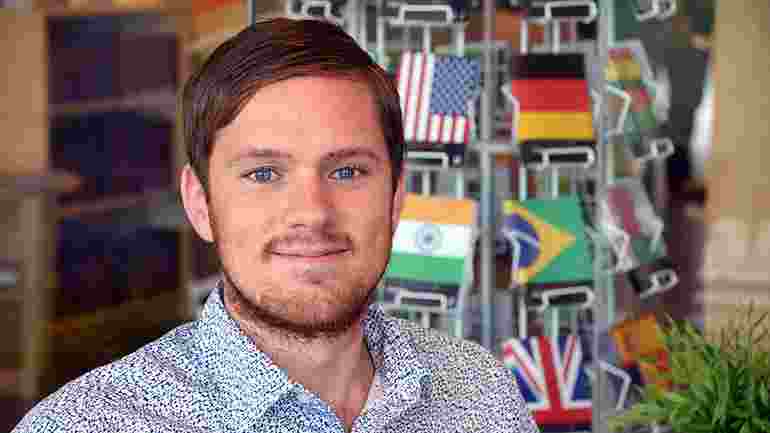 Calle Håkansson is studying the EU as an actor in defence and security, with a special focus on the European Commission's growing role in the field.

In an increasingly tense global political situation, the EU is trying to become less dependent on other trading blocks. Researcher Calle Håkansson has analysed how Europe is trying to become more self-sufficient while striving to strengthen relations with Asia.

“Strategic autonomy has been a buzzword since the EU presented its first global strategy in 2016. At that time it was mainly about the defence policy area, but now it covers most policy areas, such as trade policy and industrial policy,” says Håkansson, a doctoral student in global politics.

There will be more geopolitical tensions, at the same time the major players know that they must cooperate on crises such as pandemics and climate change.

The goal is to become less dependent on others and achieve more even relations in world politics. The Covid-19 pandemic and the more complex geopolitical environment have recently driven the Union's interest in finding more supply chains and partners. Håkansson sees a duality in the ambition, where the EU both wants to be free from dependence and build new partnerships.

Rivalry, particular between China and the United States, has increased in the economic field and in terms of the availability of various strategic components in new technology. Here, the EU gets stuck between the parties and tries to find a way forward.

“As the US becomes increasingly interested in Asia, Europe's interest also increases. It is about technological development, but also about Europe having to keep up when the geopolitical game plan is moved towards Asia,” says Håkansson.

The many crises of the last decade have, he believes, played a major role in the development: migration, Brexit, the attacks on the rule of law and the pandemic. The first crises were more difficult for the EU to deal with, but with regard to Covid-19 and the ongoing war in Ukraine, the Union has shown a completely different crisis management approach.

“Surprising decisions have been made, everything from the Corona Fund to sanctions against Russia, and the supply of weapons to Ukraine. The decisions are in line with Europe being more independent and autonomous and having its own voice in the area of foreign policy,” says Håkansson.

He believes Donald Trump's questioning of NATO and criticism of the EU has driven the development of defence policy within the EU, that they want to take responsibility for their own security.

“Instead, now we see perhaps the most pro-European administration in the United States in decades. Cooperation between Europe and the United States is very strong around Ukraine. At the same time, there is a risk that Trump or someone similar will return in 2024.”

It is important to navigate an increasingly uncertain world. Europe is closely linked to both China and the United States and there must be balance between them, believes Håkansson. Despite the agreement on Ukraine, there are also underlying tensions within the EU, which may come to the surface again.

In the future, Håkansson suggests that the EU must take a greater defence policy responsibility for its own immediate area as the United States shifts its interest towards Asia. He also believes that we will see greater transatlantic cooperation in the economic field, precisely to try to manage the risks in world politics.

“There will be more geopolitical tensions, at the same time the major players know that they must cooperate on crises such as pandemics and climate change. There is a duality. Cooperation but also rivalry and competition,” says Håkansson.