Unveiling the universe by zooming in on its smallest pieces 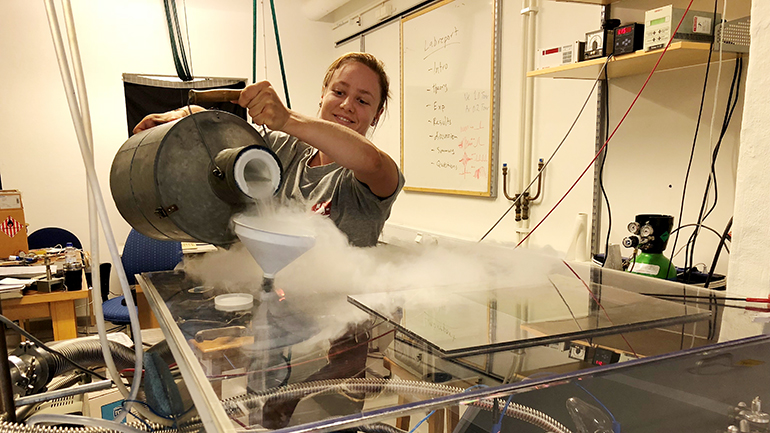 "By using electrons to study the atomic nucleus, we can obtain a deeper understanding of the mechanisms behind the creation of different elements and thus of how the universe began," says researcher Asimina Papoulia.

If we understand how the smallest parts of matter work, how they look and interact, then we can further understand the universe. In a new dissertation, researcher Asimina Papoulia presents methods for interpreting the light emitted from stars.

Astronomers can see things like size and temperature, but they need our help to see what light represents and then our data can show that the light, for example, has been emitted by aluminum atoms in the star's atmosphere.

The basic building block of all known matter is the atom, which consists of electrons moving around an atomic nucleus. Our knowledge of the creation and evolution of the universe comes mainly from the light emitted from the atoms of which a star is composed.

The light can be displayed as an energy spectrum with spectral lines that have different wavelengths and intensities. The wavelengths of the spectral lines — or positions — reveal the elements that make up the stars, and from the intensity of the lines one can determine the abundance of the different elements.

“The movements and behaviour of electrons say something about the atomic nucleus,” says Papoulia, who, as an atomic physicist, bridges astronomy with nuclear physics.

Using telescopes, astronomers observe the spectra of the stars to read which elements the stars contain. To interpret the observations, reference data from the atoms are needed. This data can be determined via laboratory measurements, but they are often expensive and time consuming. Data from experiments also do not always meet the requirements; it is therefore necessary to develop models that can then be used to make calculations.

Papoulia produces reference data from atoms that can be used to interpret observations from stars. By using and developing computer programs to describe how the electrons in an atom behave and emit light, she produces data that help explain the observations.

“Astronomers can see things like size and temperature, but they need our help to see what light represents and then our data can show that the light, for example, has been emitted by aluminum atoms in the star's atmosphere,” says Papoulia.

The dissertation consists of two parts: in the first, the researcher develops a method for providing astronomers with more reliable reference data for atoms. This data can help them improve their models and interpretations of stellar spectra. In the second, she develops and presents a new method for obtaining properties about the shape of atomic nuclei that have not been investigated before.

An improved understanding of the shape and dynamics of the nuclei is important for our overall picture of the universe, as nucleosynthesis — new formation of atomic nuclei — is closely linked to stars and galaxy evolution. Papoulia's research is thus, in the long run, a contribution to the understanding of how the universe was created.

“If we can provide nuclear physicists with information about the properties of atomic nuclei, they can understand their structure better. This in turn means that they can better understand the mechanisms behind nucleosynthesis when different elements were created in the universe. Then we can make better models for chemical evolution and get a complete picture of how the universe was created and developed,” adds Papoulia.