A love letter to Lviv 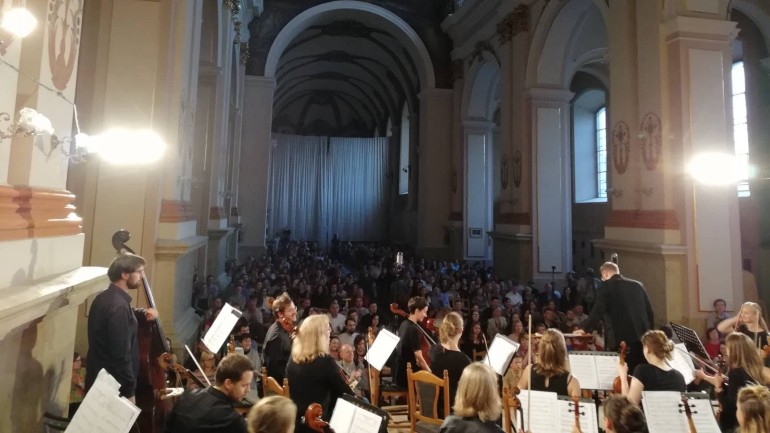 The Malmö Academic Choir and Orchestra performing in Ukraine

Conductors, composers, musicians… friends. Many putting down their instruments and picking up weapons to defend their culture – the soul of Ukraine. Daniel Hansson, Malmö University’s director of music, speaks of his heartbreak as he watches a country he has fallen in love with being torn apart.

Hansson, a respected conductor both within the University and the community, established a bond with Ukraine after a tour with the academic choir and orchestra in 2018. He originally chose the country for no other reason than pure curiosity: “It’s a vast European country that’s really close to us that almost no one knows anything about.”

During the Stalinist era, Ukrainian art was both hidden and even forbidden.

During the tour he forged friendships and collaborations, and later a passion for a particular city so strong that in 2019 he was granted the position of Guest Professor at the National Conservatory of Music in Lviv.

“After going there so frequently, Ukraine became my ‘Narnia experience’. It was the wardrobe I went in, and when I came out the other side I was in a cultural landscape of which one would normally only dream. One particular city stood out, Lviv. It is a sleeping beauty with an exceptional and dynamic cultural scene,” says Hansson, who stays in the city up to seven times a year while he teaches.

“During the Stalinist era, Ukrainian art was both hidden and even forbidden; partly because of this, art has a front position in society – people cherish the art forms with a strong will to emphasise a cultural identity.

“I have many different relationships with people there: people I work with, people I teach, members of the orchestras. When you work together you get to know each other, and in this specific situation it haunts me to see how their lives have changed.

Preserving this heritage is part of the Ukrainians defence operation, and I would argue, that is of equal importance to tanks.

“I see how many musicians are now forced to change instruments to arms. The Ukrainian will to defend itself is very, very strong. The very thought of seeing people who I have met as musicians with guns horrifies me; even though one knows it is of their own free will. Young men and women shouldn’t die over a fabrication.

“All over the country there is a great desire to aid the defence. I know people who are not enlisted yet but have still dropped everything to work really hard to defend their country. My friends in the cultural scene do a lot to promote and protect the cultural heritage.

“One terrible outcome of this conflict could be that, once again, the nation is under the threat of being occupied. During the Stalinist era, the cultural police made sure Ukrainian culture was forbidden and destroyed. We are now in a situation where that could happen again. My friends have been digitalising scores of music in order to make them available for the world to play.

“It is an initiative called Ukrainian Scores, which is part of the wider project Ukrainian Live, an app set up to spread and preserve their cultural heritage.

“In terms of a conflict like this, that might seem a less important thing to do, but I spoke to a friend who said, ‘you might think so, but that is the reason we are fighting – the soul of this nation is at stake, and part of this is our music, and our voices and our poetry’.

“Preserving this heritage is part of the Ukrainians defence operation, and I would argue, that is of equal importance to tanks.”